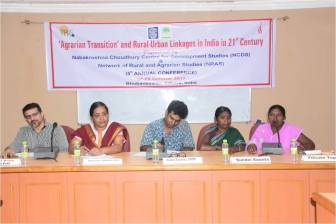 The session started with a welcome address by Ms Sabarmatee, SAMBHAV at 10:30 am. She invited the Dr Srijit Mishra, Director, NCDS and Mr Sailen Routray, CSHB to be moderators of the session. Session focussed on farmer perspectives on the policy interventions by the Government namely Paramparaghat Krishi Vikas Yojana (PKVY), Mahila Kisan Sasaktikaran Pariyojana (MKSP) and Special Programme for Promotion of Millets in Tribal Areas (Millet Mission Odisha). Farmer representatives from Sundergarh, Rayagada and Koraput participated in the discussion are following.

Below is the list of women farmers who were part of the panel discussion:-

Ms Sabarmatee asked each of the participants to introduce themselves. Farmers introduced themselves in their native language. She and co-panelist (Mr Sailesh Routray) translated the introductions into English for the benefit of non odiya speaking audience.

After introductions, Sabarmatee asked Sundei Suatha to speak about her experiences related to organic farming and PKVY in particular.

Ms Sundei Suatha spoke about the history of farming practices in her panchayat. She said that due to policies of the government, many people are moving towards chemical agriculture. Many of the Adivasi farmers are still reluctant to adopt the chemical farming practices. Adivasi farmers’ especially small farmers cultivate diverse crops and consume them accordingly. Adivasi farmers in Rayagada mostly survive on millets and other naturally grown food crops. She said she does not understand why the government is promoting chemical farming. Food cultivated through chemical farming is neither tasty nor healthy. They cultivate their crops through indigenous seeds. Previously each village had many seeds but seed varieties have come down drastically in the last couple of decades.She is also using modern equipment like weeders and other implements to reduce the drudgery. After the launch of the PKVY , she has become involved in the promotion of the organic farming. She is very happy that government is now encouraging organic farming after supporting inorganic farming for many decades. She has become a trainer and regularly trains other farmers on organic farming now.

Ms Filicita Topna said that she hails from Sundergarh district. Though farmers in her region traditionally cultivated without chemical inputs, there is an increasing trend of farmers moving towards the chemical agriculture in last 20 years. She used to practice chemical input driven agriculture. She came in touch with CIRTDS who explained to them about the benefits of organic cultivation. After interaction with CIRTDS, she realised the importance of organic farming. She stopped using chemical fertilisers.

With the support of CIRTDS, they have got trained in the agronomic practices. They started preparing Jeevanmrutha and Beejanmrutha. Previously they never used to treat seeds but are now treating their seeds which are reducing the pest attack. They also got trained on SRI methods. They experimented SRI method in millets and achieved a great success. Productivity doubled. They cultivated mixed cropping systems involving mustard potato and radish in SRI method. These gave tremendous success without use of any chemical inputs. Due to extensive training, they can now prepare 10 types of organic pesticides for various diseases. They are also promoting collective farming in 17 villages. Due to PKVY programme and interventions by CIRTDS, there has been a reverse in trend in the cultivation practices albeit slowly.

Ms Vaidehi Mahanto spoke about how they are bringing landless farmers into women collective. They are teaching landless farmers about organic farming. They have taken land on lease. Some of them have become good trainers. Through organic farming, they are now able to make a living and send their children to schools.  She said she is not repeating the points as most of them were covered by her colleague. 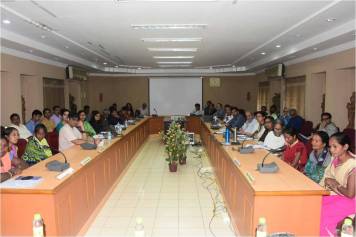 Ms Jayanti Hetrika said that due to their involvement in MKSP project, the community has become strengthened. They are also promoting local seeds. The arrival of machines such as power tiller, sprayers, and weeder has reduced the drudgery.  They are currently cultivating vegetables in 300 acres of land collectively and are selling them in various places such as Berhampur and Srikakulam. Due to machinery and knowledge, the huge surplus in production is being generated. Initially, women farmers used to be very shy to venture into marketing. But after the project intervention, they are going for collective marketing for better price realization.

Ms Mami Penden from Rayagada shared that currently there are engaged in cultivation in around 6000 acres. Initially, they used to be very worried about how they would procure seeds, pesticides and other necessary inputs for the cultivation. From the time they shifted to organic farming, they are no longer worried about these things. Through MKSP, they formed many women SHG groups who collectively engage in crop planning process. They plan in a way to ensure that harvest comes at the same time and this makes aggregation very easy. Collective aggregation and collective marketing have made brought a substantial difference to their incomes. From the time, chemical farming has started in their area, they have started seeing the emergence of diseases such as blood cancer, which was unheard of in their area before.

Ms Usha Paikia mentioned that their ancestors used to cultivate millets through broadcasting. Though her family cultivated millets, the area under millet cultivation was slowly shrinking. This year, members of SACAL NGO trained the farmers in the new SMI method. This method has increased the yields substantially. Crop cutting experiment carried out in the field showed that they got around 13.6 Qntls per acre. Seeing the result, nearly 20 other farmers in the village are planning to take up SMI method next year.

Ms Laxmi Khillo shared that they started working with CYSD in 2002 by forming an SHG. Koraput is the land of Mandiya. People always consumed Mandiya. It was a staple food. Previously Adivasis of Koraput cultivated millets through broadcasting and that gave a yield of only 3-5 Quintal per acre. It also needs number seeds. In this year, CYSD trained the farmers on SMI method and organic manure and organic pesticide preparation. Previously none of the farmers did seed treatment. After the intervention of millet mission, around 300 farmers did seed treatment and observed that there was no pest attack. As of now, harvesting has not been completed in the Koraput district, but seeing the number of tillers, it is expected that yield will be around 12 to 17 quintals per acre. Though millets such as finger millet and little millet were traditionally cultivated in the Koraput region, they did not know that they can be eaten as biscuits, upma and kheer. Due to millet mission intervention, they are learning various new ways to cook millets and are hopeful that this will increase the consumption among the new generation.

Ms Tulsa Bhumia who is working as community resource person in Boipariguda block. She is very motivated to work on millets as it is an ancient crop of the region. She said that though many millets such as pearl millet, barnyard millet, foxtail millet are grown in the region, finger millet and little millet are the major millet crops in Koraput region. There has been a decline in the area of millets due to other lucrative crops and due to certain structural impediments related to millets such drudgery and low price realisation. Millets used to be consumed as either pejo or javu and many people were not aware of nutritional benefits of millets. She has expressed happiness that millet mission is trying to address these concerns.

A: As of now, we don’t share our land as it is very complicated. But we collect aggregate and market the produce. In the KBK region, single women or widow or old farmers whose son has migrated to give land to landless labourers in our group. Women groups negotiate with the landowner on behalf of the landless farmers. Women groups support the landless farmers and collectively market the produce.

Q  Have adivasis reduced consumption of millets due to PDS?

A : Koraput island of mandiya. People consume mandiya as their staple diet. They begin their days, especially in summer with consumption of mandiya.

A Before the project, women depended mostly on the men and did not feel economically empowered. They also felt very shy to do business. After the programmes, women have made sufficient money from the organic vegetable cultivation. They also became more confident and started directly selling in the market.

Dr Srijit Mishra summed up the session highlighting that not only are farmers getting back to their traditional methods, but they are also not shying away from use of technology. Farmers are displaying true scientific attitude. This should be an eye-opener for everyone.

View all posts by milletmission