Millets were prominently grown crops in the rainfed regions of Odisha. They played a very important role in the diet of tribal communities. Millets are climate-resilient crops and have high nutritive values. They helped to mitigate dry spells and address nutrition security of the tribal communities.

In this context, the Government of Odisha has launched Odisha Millets Mission in 2017 to revive millets in farms and on plates. Odisha Millets Mission aims to increase household consumption, set up decentralized processing units to reduce drudgery, improve productivity, the formation of FPOs and inclusion of millets in ICDS, MDM and PDS. OMM is a unique programme which brings Government, Academia, farmers and NGOs together for benefit of millet farmers.

Odisha Millets Mission is being implemented in 72 blocks spread across 14 districts with a budgetary outlay of Government of Odisha has allocated Rs 536.92 Cr. Odisha Millets Mission reached out to 51045 farmers in the FY 2019-20. Out of different millets, Finger millet (Mandia) and little millet (Suan/Gurji) cover most of the area in the state of Odisha. Finger millet (Mandia) is the major crop covering more than 80% of the area. Finger millet (Mandia) is especially nutritious. As per CSIR-CFTRI, It has 34 times more calcium than rice, 7 times more iron than rice, 4 times more minerals and 13 times more fibre than rice. State Agriculture Policy of Odisha has also emphasized on the promotion of millets (nutri-cereals) for better nutritional security.

In addition, the Government of Odisha has approved the inclusion of Ragi ladoo in the ICDS as additionally. It is also taking up pilots in the inclusion of ragi based products in ICDS through a technical partnership with CSIR-CFTRI. Government of India and Niti Aayog have recognized OMM as the best model and asked all the states to adopt the model.

Emphasizing the importance of Finger millet (Mandia) to the culture and history of Odisha, Government of Odisha has selected “Mandia” as a mascot for the Krushi Odisha 2020. 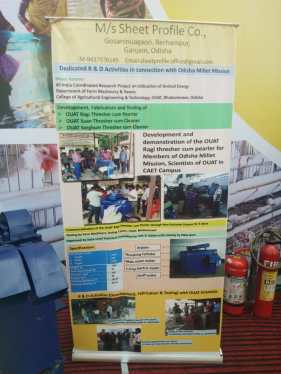 View all posts by milletmission